Back to all posts

Connie, my first teacher, invited me to ride the Farm’s Arabian stud stallion, Menesson, outside in the big, grassy, white fenced paddock. I’d ridden only in their big indoor arena for the past year, where there is more complete control, and where weather isn’t a factor. (We’d tried to go outside two other times this spring, only to be thwarted by rain and thunderstorms.)

Today was lovely. The sky, a robin’s egg blue, hosted a light, intermittent breeze that riffled the emerald leaves of newly greened trees, and gently nudged fluffy clouds across the endless ceiling above.
There were few passing cars, now, in late morning.

The second fine thing: Menesson’s long tail would be revealed at last. I’d never seen it unbound. Tails as long as his are expertly braided just below the dock (a horse’s tailbone), then covered with a special wrap, akin to an Ace bandage, and, finally, covered with a long pouch to keep the hair clean and dry and aid the horse in swatting flies.
But there’s another reason: he wouldn’t step on it when backing up, or snag it on fences or trees, or have it trodden on by other horses’ hooves. Ouch!

We saddled him and walked out to the big paddock. Chris, the man who knew all about this art, undid it and combed it out. I was agog! It had to be eight feet long! Chris smiled and commented that he’d trimmed at least a foot away just a week ago!
I hopped aboard. Menesson was happy to stretch his legs, but he soon began to signal some apprehension. His ears perked as he stared toward a possible predator.
I looked that way. Aha! Someone renting the home next door had hung a slim, bright red hammock between two large trees just a little way from the fence. The breeze caught it intermittently, billowing the light nylon, and a potential horse ‘monster’ was born.
This sort of thing is why a rider always needs to be alert. A horse will react instantly to a perceived threat, as it is a prey animal.

I reassured him, and felt a slight lessening of tension, but one good windy blow to fully inflate and swing that hammock could send me flying. Menesson is highly trained and was certainly showing discipline and trust in his rider, but still, it would be stupid to ride too near that thing. I hate flying unless I choose to.
(Joe wryly commented that statistically, horseback riding is more dangerous than motorcycling, which we enjoy, too.)
I kept to a large circle on the far side of the paddock, but his attention was still divided.
Joe took some pictures so I could see how we looked together. Two more nervous shies from my horse, though, signaled the end of outside riding. (The next door resident would be asked to relocate the hammock, or let Farm staff slip it off its moorings while students practice outside.)
I hopped off and led him back into the barn’s arena, where I would have much more control of the environment.

Note the special vest I wear. Made especially for horseback riders, it has a CO2 air canister that, when the vest’s cord, attached to a saddle ring, is abruptly separated from it as the rider is flying off, triggering the canister to fire, instantaneously inflating the vest to protect the entire neck, spine and rib cage. It’s a wise precaution, often adopted by many professional event riders.
The vest, by the way, is very light, indeed. And the sound it makes when activated is negligible.
It is, by the way, the sensible policy of Casalae Farms that riders must don helmets.
Joe and I visited more of the Farm’s horses afterward.

I hope you get a kick out of the photos! 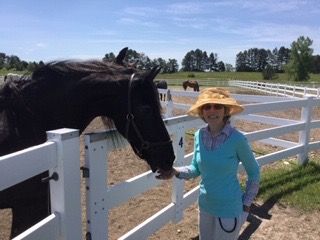